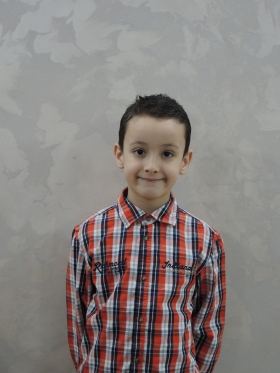 2015 marks the year that Valentin A. (born in 2012) was faced with the beginning of a series of dramatic changes in his life. After tirelessly trying to counsel and help Valentin's parents, the local authorities noticed a total lack of interest and effort on their part, and no longer pursued the rehabilitation of their lifestyle. Subject to precarious environmental conditions, a noticeable lack of hygiene, nutrition and basic care, in addition to the parents' alcohol abuse and behavioral deficits, Valentin's older siblings were directed to foster care in 2011.

In 2015, Valentin went through the same sufferings and feelings of neglect and abandonment that his siblings experienced in 2011. His mother was arrested and there were no relatives found that would have been able to take care of little Valentin.

When we first went to see Valentin, we found an emotional little boy, asthenic and hopelessly looking at us. His tiny body was covered in insect bites while his face seemed to be caught in a past moment- a traumatic moment that he was strenuously trying to get out of.

He found his home after our meeting! Although it took him a while to adjust, after meeting new children and experiencing again (or better said for the first time) the feeling of being taken care of, Valentin became a happy child! We know we are but instruments in the lives of our children but we thank our Lord for entrusting us with this task and offering us the support of contributors like you. We could do nothing by ourselves, and we thank you for making stories like Valentin's possible.

These are some of the children at the orphanage, click a child to see a more detailed profile if he or she has one.
Adelina M

These are some of the lives changed by Hand of Help.
Dumitru

The child of the month is Adelina M. Every story is as unique as the child who lived it. Each life is a cacophony of emotion, running the gamut from joy to pain, from hope...